A major benifit of an MPLS network is the interconnectivity with Quality of Service and Security, but at a high cost.

Some folks have turned to Internet as a solution with VPN over the top of that. This solution does solve some of the bandwidth constraint problems, as you can bring in more internet access and have additional bandwidth and layer on VPN to securely get traffic from one location to another. The challenges are the inability to protect certain types of traffic over anything else when it is Internet based. Firewall, router, VPN configuration, branch heavy equipment, and configuration are also required. Still, the benefit is a low-cost high-bandwidth, albeit you can’t prioritize traffic over the top of it.

The industry is shifting towards software defined networking.  It is also known by several other buzz words like just SDN or Hybrid WAN.  SDN gives you the look and feel of what an MPLS solution brings to the table, with the ability to prioritize certain traffic over another. It’s configuration adjustment is more simplified than a traditional router switch.  You can also bring significantly more bandwidth for about the same money you would spend on a traditional network.  Here are the main benefits at a glance:

At a high-level, the image below shows what an SDN WAN looks like.  Instead of bringing in an MPLS network into a branch location, customers can bring in two diverse internet connections. One is delivered on a cable modem with 50 megs of bandwidth, and the secondary a 4G router. In an SDN environment, a router is placed on the edge to provide a couple of features:

By application and by destination, this software can make intelligent routing decisions.  Thus, if you have traffic destined for Office 365, it will decide if the cable or the 4G path is best, based on who has the best peering and who is the closest. Voice and video can be prioritized whether is outgoing or incoming.  You can create a quality of service policy on both sides giving you end to end performance control that you would expect.  So yes, you can get the performance of an MPLS solution with an SDN WAN solution even though it’s over an internet connection. Internet service is readily available and very cost effective as opposed to MPLS environments.  The below graphic from Amernet illustrates the flow:

With voice or IP communications, the ability to prioritize traffic is important. An SDN router keeps calls up and functioning in the event of any congestion, even Internet-based congestion. The router will duplicate the voice traffic and keep a secondary stream ready to go, so if it degrades while flowing on the primary connection, it will instantaneously flow over to the secondary connection and keep the call alive.

The image below reflects data collected with some intentional testing. In this example environment, we see two internet sources with high latency detected on one of the links.  Seeing this, the application reroutes the traffic across the secondary link, and it doesn’t skip a beat. As things change over time, the traffic comes back and becomes more normal, and switches back and forth across the two solutions. That’s a peek into the magic. 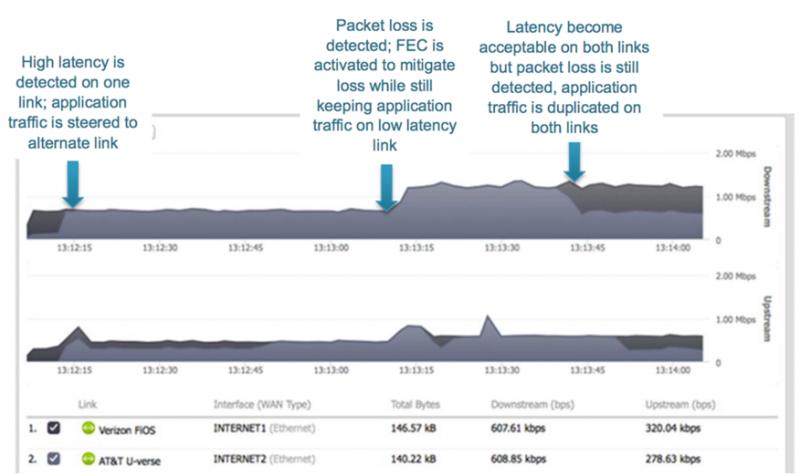 One of the other challenges in the industry with firewalled and traditional environments is the difficulty in creating the configuration in the equipment. If you have ever unboxed a Cisco firewall and wanted to create a VPN tunnel, it is a very complex setup which might require outside resources and other heavy lifting. In an SDN, it’s more of a cloud driven application where these devices put out on the edge are configured in a portal with a simple configuration that is easy to manage and adjust real time performance.

Simple Monitoring and Troubleshooting from the Cloud

Because these solutions are driven from cloud interface, the administration of devices can be done anywhere and are simple enough that anyone can take a look and see how the network is performing.  Below is another image from the Amernet Portal. 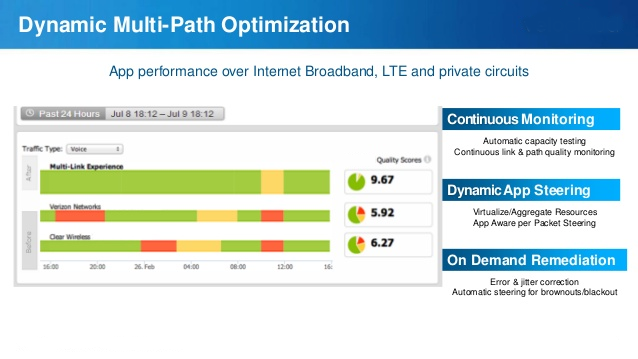